Usually, when I see a new bird for my Ontario list I'm thrilled and happy to tell everyone about the encounter but this time that didn't happen. You see I didn't get a chance to share this sighting with my friends and only a very few people got to see the bird.  Normally when someone finds a very rare bird the sighting is posted on ONTBIRDS (or similar listserv) which gives many people a chance to look for the bird. In this case the bird departed before the identity was established.

I'm always interested in any local records of hummingbirds after mid October when most Ruby-throated Hummingbirds have left the region. While there are records of Ruby-throats as late as November 26 in Michigan there is a higher probability that a late hummingbird might be a different species.  For example a hummingbird that appeared at a feeder in Kingsville on 18 November 2007 turned out to be an adult female Rufous Hummingbird. It remained at the feeder to December 1. 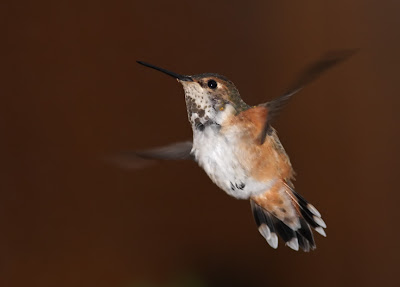 Rufous Hummingbird, Kingsville, ON, November 22, 2007
On October 30, 2010 I learned of a hummingbird coming to Tom & Peggy Hurst's feeder in Cottam, ON.  After watching it for a while I decided it would be a good idea to come back the next day and get some more photos as there was talk of an Anna's Hummingbird that had just shown up in the UP of Michigan and this bird was not a typical plumaged Ruby-throat. We hoped it might be an Anna's Hummingbird but I hadn't seen an Anna's for several years and wanted to examine my photos and check some references before getting too excited. Unfortunately the bird never returned to the feeder. The few pictures that I digiscoped with a point-and-shoot camera were eventually sent away to hummingbird banders for an expert opinion. Both Sheri Williamson in Arizona and Bob Sargent in Alabama confirmed that this was an Anna's Hummingbird. 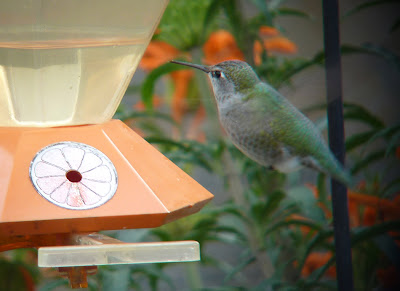 Anna's Hummingbird, Cottam, ON, October 30, 2010
This is the first record of Anna's Hummingbird for the province of Ontario. This species also appeared in Grand Maris, Michigan (2), Saylorville, Iowa and Val-d"Espoir, Quebec this fall.  The differences between female/immature plumaged Anna's and Ruby-throated are subtle. The bird above shows dingy dusky flanks with some green spotting, a straight bill and thick neck. The loral pattern is also different from Ruby-throat with a pale eyebrow, blackish spot in front of the eye and indistinct pale grayish wash behind the eye. Visible in the photo below is a distinct patch of dark spotting on the throat which is a normal pattern for female Anna's. 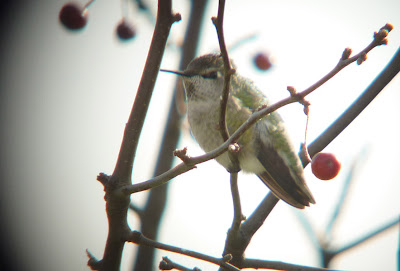 In the Great Lakes region it is a good idea to keep hummingbird feeders up and supplied with sugar water until the snow flies! Species such as Rufous and Anna's Hummingbirds are quite tolerant of cold weather and capable of surviving freezing temperatures. If you are lucky enough to have a hummingbird appear at your feeder please report it immediately to your local birding hotline. My number is 519-966-5852.
Posted by Paul Pratt at 12:05 AM 1 comment: