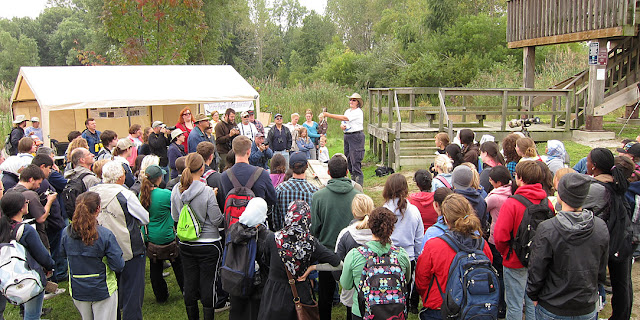 Hawk banding demonstration at Holiday Beach
Each fall the Hawk Migration Festival is held over two weekends at Holiday Beach C.A.  This year there were 5,476 Broad-winged Hawks recorded from the hawk viewing tower on the first day of the festival. 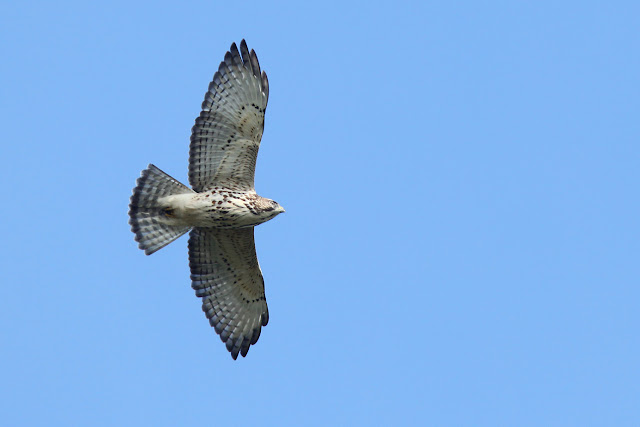 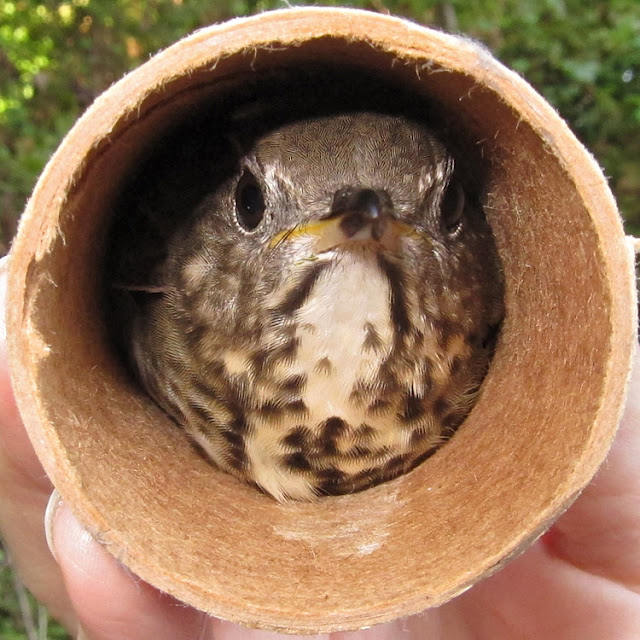 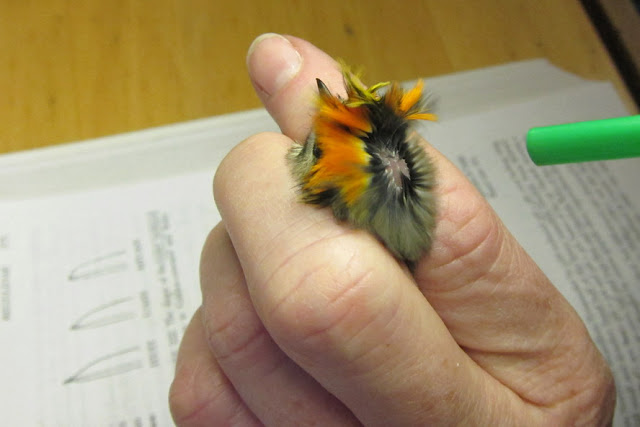 The feathers of the head can be parted by blowing through a straw.  The bander is looking to see if the skull is completely ossified.  This male Golden-crowned Kinglet was photographed on October 6. 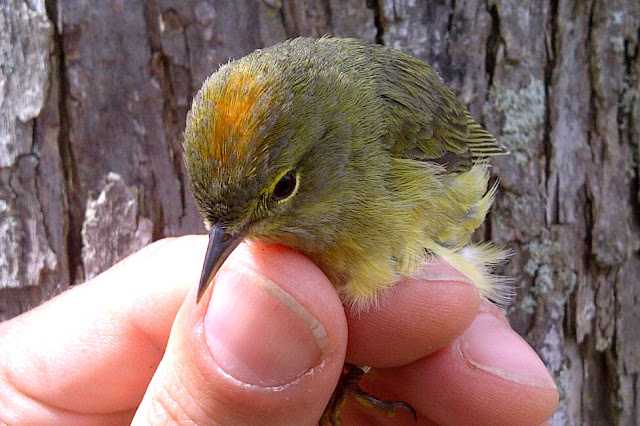 male Orange-crowned Warbler (spring plumage). Early October is the best time to look for Orange-crowned Warblers. This species is scarce in the spring but relatively easy to find in the fall. Look for them in thickets, goldenrod meadows and shrubby edges.
Posted by Paul Pratt at 2:52 PM No comments:

I am trying to catch up and post a few things. Last May I went out to Alberta with Tom Hince. Our goal was to do a Big Day of birding and hopefully set a new record for Canada. We had done three previous big days in Alberta and last year we were only one species from tying the Canadian record of 214  species.

After a week of scouting and some great help from local birders we were ready to do our big day on June 1. We had a great start near Cold Lake and the nighttime hours passed quickly. In addition to owls there are lots of birds to look for in the hours before dawn. Our very first stop produced Lincoln's Sparrow, Nelson's Sparrow, LeConte's Sparrow, Wilson's Snipe, Mallard, Yellow Rail, Clay-colored Sparrow, Great Horned Owl, Northern Saw-whet Owl and Sora.  Warblers such as Common Yellowthroat, Ovenbird and Connecticut regularly sing at night and we continued to pick up birds through the first hours of the day. By 4:00 am we had 50 species on our list and this grew to over 80 by sunrise. We had already driven over 240 km by this point.  I won't go through the entire day but here are a few photos taken during the trip.


A display of Northern Lights near Cold Lake 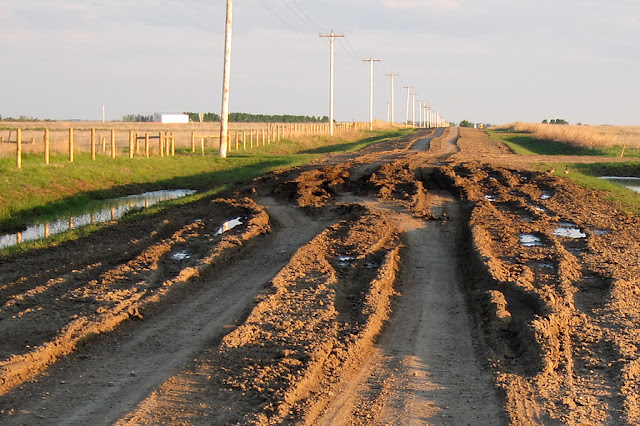 The south was very wet and many backroads were not passable unless you had a vehicle with good ground clearance. 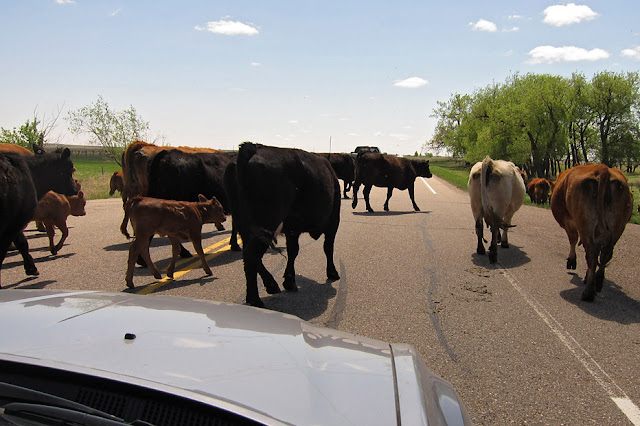 Not something you want to encounter on a Big Day! 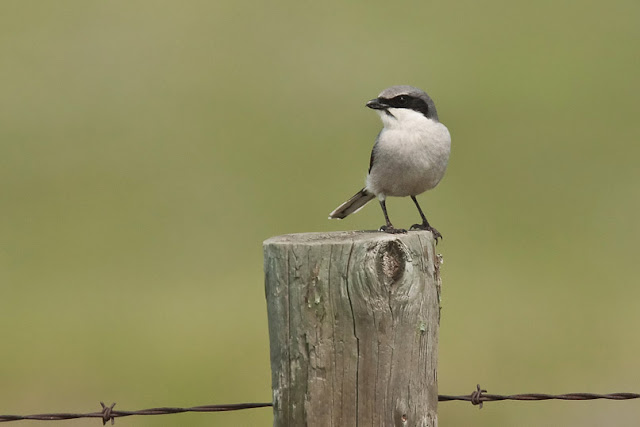 Loggerhead Shrike
We reached 200 species at 4:57 pm with the foothills and mountains still to come. 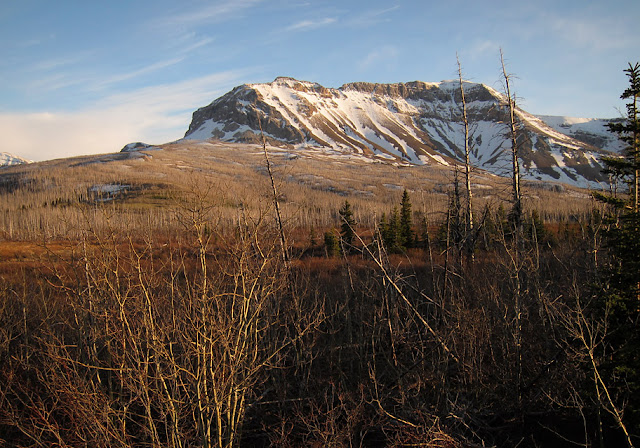 Sofa Mountain.  The wetland in the foreground is a good location for Fox Sparrow. 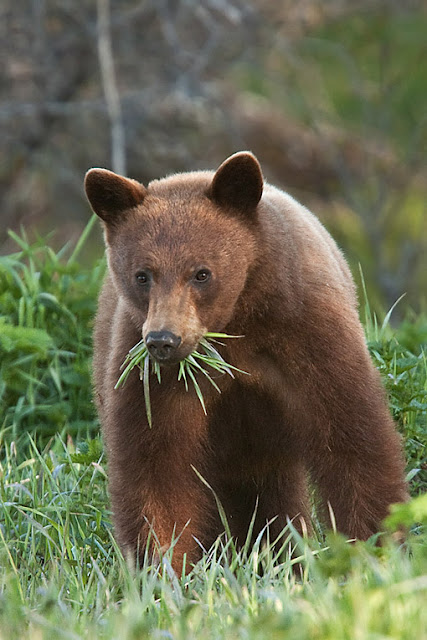 Another of the few photos taken during the big day was this Black Bear at Lower Waterton Lake. 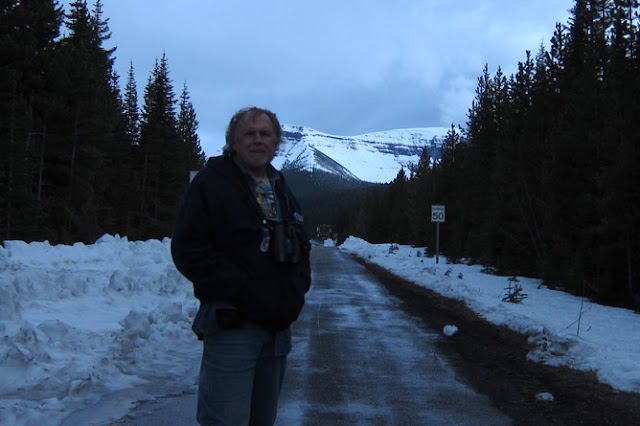 Number 218 for the Big Day was a Golden Eagle on its nest in Waterton Lakes National Park. Here I am at the end of the Cameron Lake Road about 10:30 pm., at the end of 1,280 km of travel for the day.  Visit Tom Hince's blog for other photos from the trip.

I usually head to Point Pelee National Park if I want to see lots of spring migrants but there are other places in the Windsor region that can be very productive for birding. One relatively unknown location is the Big O Conservation Area on the outskirts of Comber.
Woodlots are few and far between in this part of the county which is devoted to growing corn, soybeans and winter wheat. Woodland birds have very few choices on where to rest and search for food during migration and this small patch of swampy woodland can be full of migrant birds in May. This "migrant trap" was alive with birds last weekend yet I was the only birder present. Here are a few of the birds present that day. 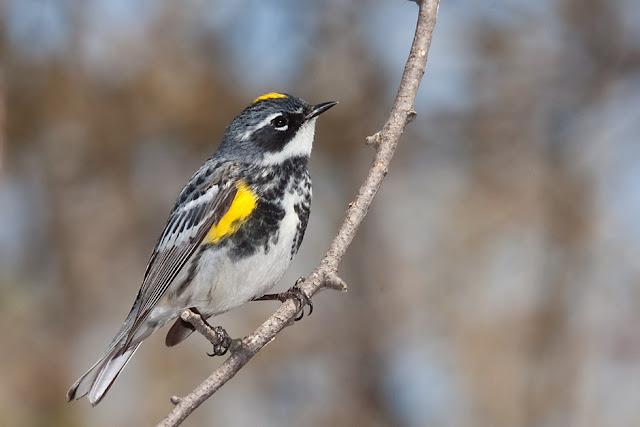 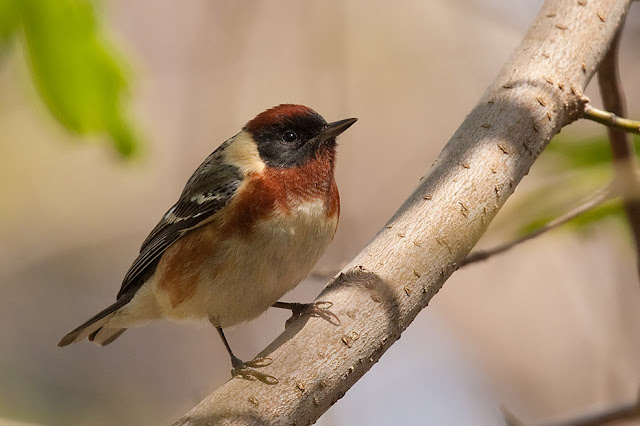 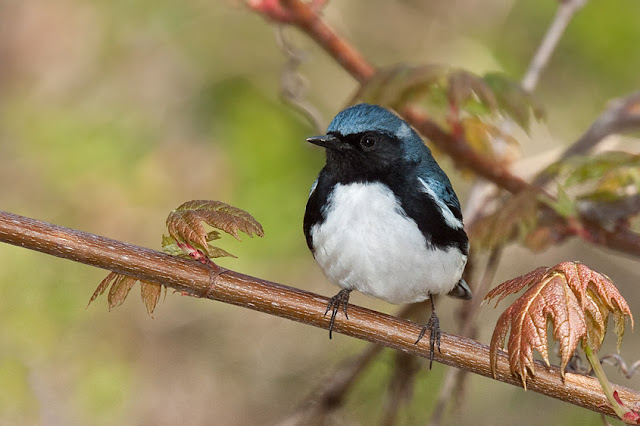 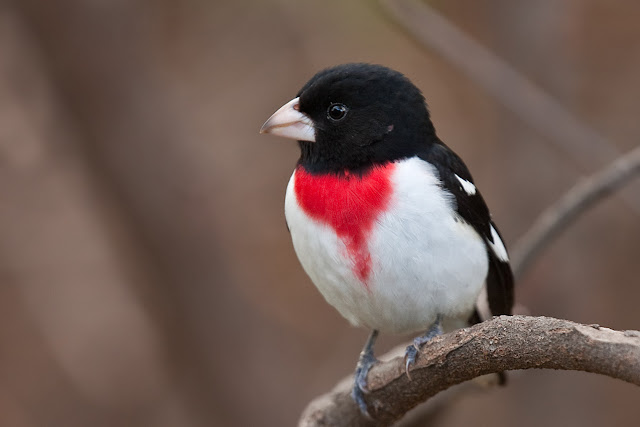 This Rose-breasted Grosbeak was waiting his turn at the feeder this evening. He looks cute but I saw one being banded yesterday and they are not meek and quiet like Blue Jays. They bite hard and bite often!
Posted by Paul Pratt at 10:51 PM 1 comment: 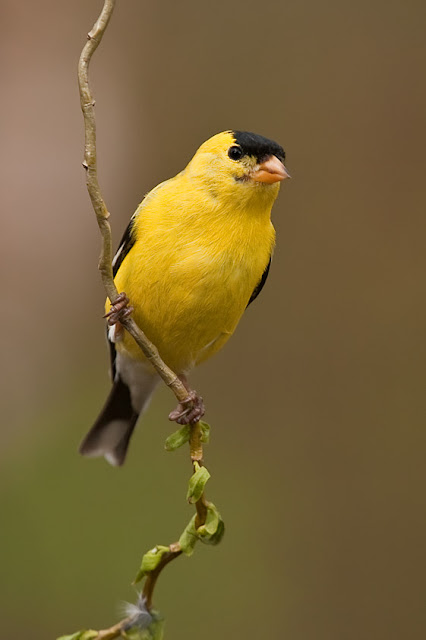 About 15 American Goldfinches were visiting the niger and oil seed feeders at home today. As a child I called them "wild canaries". They were one of the first birds I can recall identifying using a little pocket bird guide called The Blue Book of Birds of America.
Posted by Paul Pratt at 12:11 AM 5 comments: 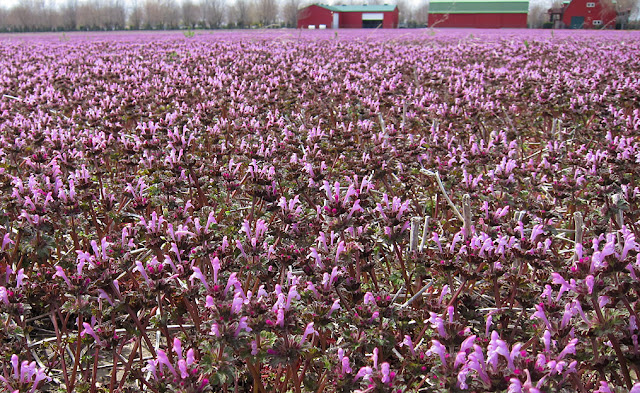 A friend in British Columbia mentioned a profusion of blooming Purple Dead Nettle in early April. Here in southern Ontario spring is not so far advance and it wasn't until today that I noticed my first Purple Dead Nettle while driving into the Tremblay Beach Conservation Area.  One end of an old soybean field was covered in millions of tiny flowers. 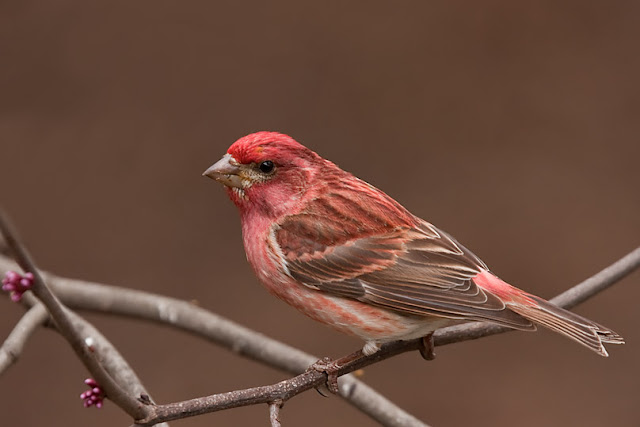 The other day I managed to get a photo of a female Purple Finch at my feeder. Today when I got home there were several Purple Finches at the feeder including this nice male.
Posted by Paul Pratt at 9:35 PM 3 comments: 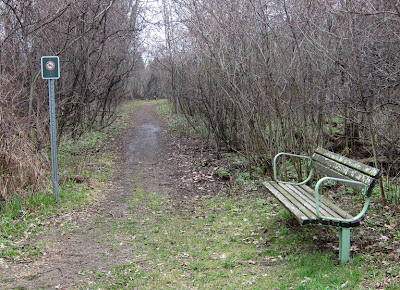 Trail to Sparrow Field in Point Pelee on April 27, 2011.  Lots of spring migrants present today in the tip area but  very few birders due to the rainy weather. The newly cleared portion of the Sparrow Field should be excellent for birding this spring. 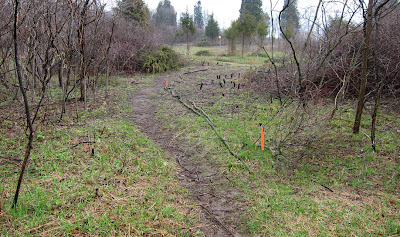 Entrance into Sparrow Field looking east.  Now there is a new loop trail around the clearing with access from the main road and east beach. Palm Warbler, Purple Finch, Field and Chipping Sparrow were present today. Here is an image of a female Purple Finch I took at home this evening. 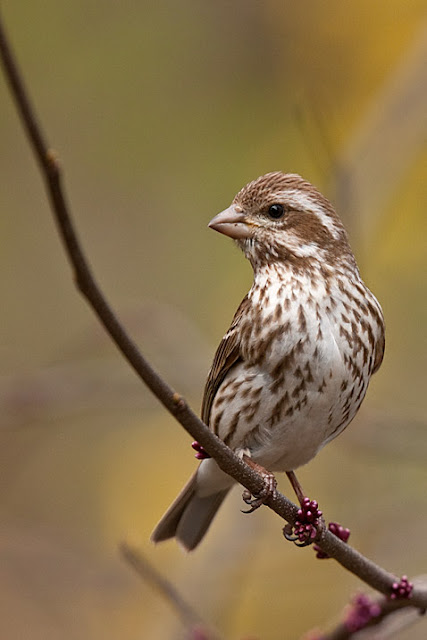 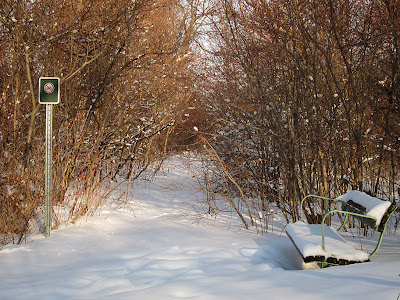 Trail to the Sparrow Field in Point Pelee National Park, 6 March 2011. The good news this spring is that the park will be brush cutting the overgrown "sparrow field" and managing it as a clearing. 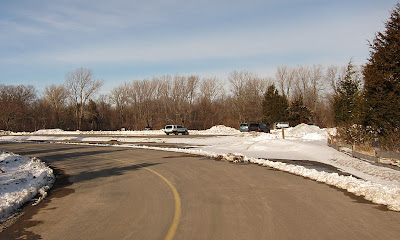 Point Pelee Parking lot in March
The snow has melted and soon Point Pelee will be attracting large numbers of birds and birders. Here are a few unusual species that I spotted in the parking lot last May.